Several things are growing around here.

We had a wonderful Memorial Day together, playing in Jonah’s little kiddie pool, tending the garden and taking long walks. We didn’t hang a flag or say anything solemn about those who served our country, but we did spend our first day together as a family without sickness and study and stress and work since Jonah was born, just laughing and playing and feeling lucky to be alive. Heck, we even cooked up some hamburgers for lunch. 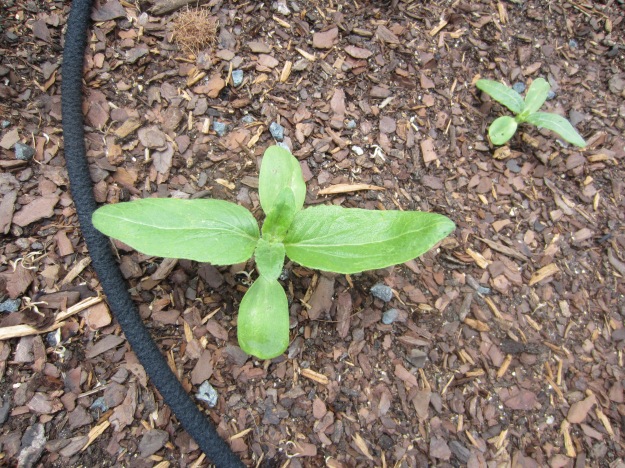 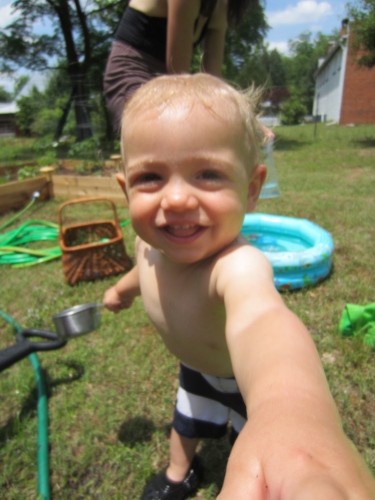 the sky above the Farmington community center

Wednesday I devoted to finishing the garden and working on some technical stuff before summer semester starts. Once school is back in session I’ll have little time for anything but work, sleep and study. Though our garden is not big, it is important to us. And we’ll continue to expand it over the next few seasons.

I planted oregano, thyme, chives and flat leaf parsley next to the basil, along with a bunch of heirloom Sunspot Sunflowers that grow to about 1.5 feet, the perfect size for Jonah and not so tall that they block out the sun on the tomatoes. Then I repaired and extended the irrigation system. 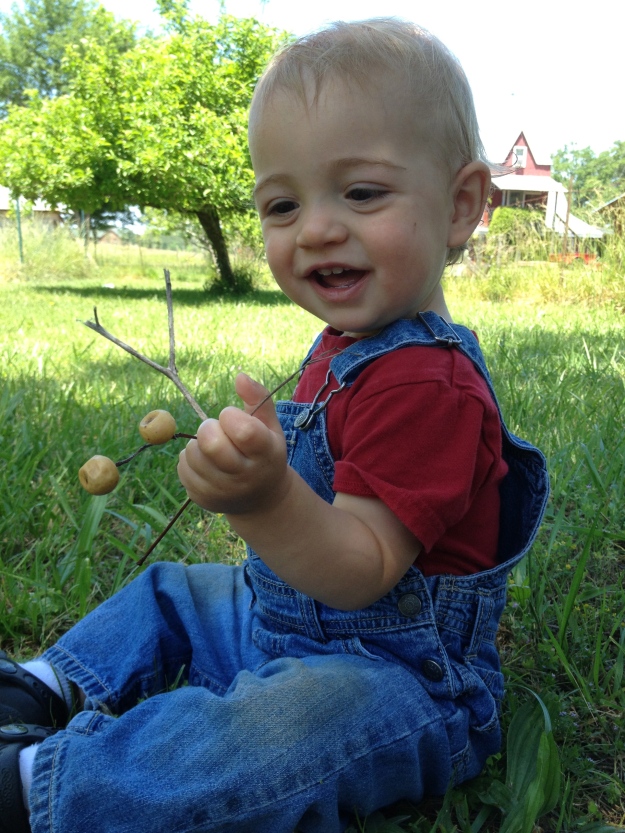 Jonah playing in the shade

This week is my only real break between school semesters, so Jonah stayed home Tuesday to help me in the garden. We haven’t hung out much since late last fall. School and work almost overwhelmed me this winter. So Tuesday was wonderful.

Not that we got any gardening done. But the spring weather was perfect. Jonah lurched all over our acre of land, collecting sticks and babbling. I did my best to keep him away from the road and out of the fire ant hills. I followed him around all day, sprinkling Amdro judiciously and talking to him about the things we saw. 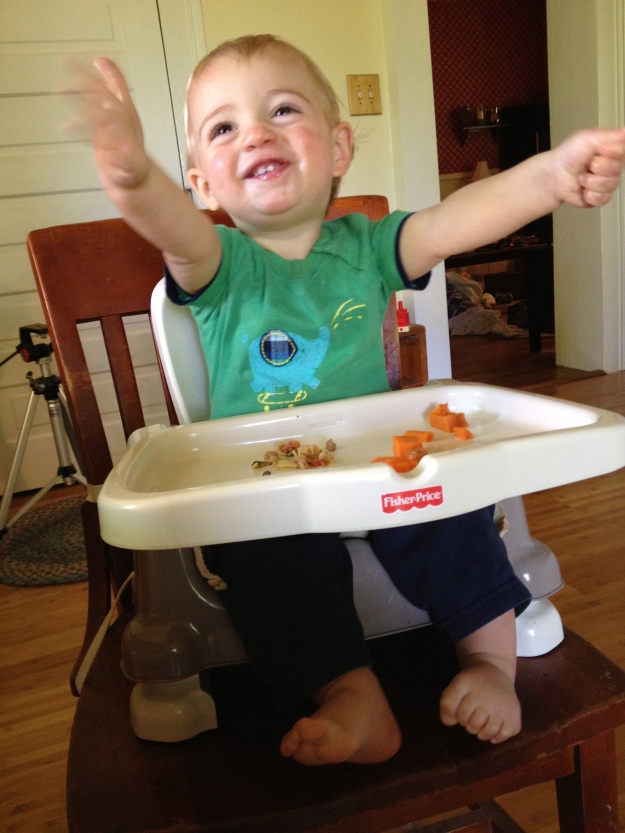 Sometimes I forget how nice it is to have a small piece of land miles outside of town. But I think it’s part of why Jonah is such a happy boy. He loves being outside, and we live in the country, so it works out well.

A word about photographing Jonah: he almost never stops moving, so any photos I post will tend to have blurry bits. I don’t mind. I would never ask him to be still or to pose for a photo. Posed photos are usually so awkward, what with fake smiles and insincere eyes. I love how Jonah utterly lacks self-consciousness. With time, perhaps, he’ll become more self-reflexive and less spontaneous, but I hope not too much. And I certainly don’t want to be the reason it happens to him. Joy bubbles out of him all day, every day. It would break my heart to think that I had helped tamp that down.

This time, I decided to mix my own growing medium. It’s far cheaper than buying ready-mixed bags of container soil, and of course it’s a great opportunity for obsessive types to get all creative with their choices and mix-ratios of the various available ingredients. I’m not obsessive, exactly, so I took the advice of the good folks at Cofer’s Home and Garden and mixed 16 cubic feet of soil conditioner (partly-composted pine bark, I think), 2 cubic feet of mushroom compost, 2 cubic feet of cow manure, 1 cubic feet of worm castings and 4 lbs. of Tomato-tone organic fertilizer. It’s a nice mix, I think, but the proof is in the tomatoes. That’ll take a few months.

In the meantime, here’s a shot of Jonah looking out our back door a few months ago:

He loves being outside, but that was a cold, rainy day, so he was stuck inside and rather sad about it.

We’ve been gardening here for several years now, with varying degrees of success. The Phase 1 garden consisted of two 8′ X 4′ raised beds built with 1″ X 10″ pressure-treated boards, filled with potting soil amended with Plant-tone organic fertilizer. We surrounded the whole affair with wire fencing to keep out the deer and rabbits.

That worked great for a few years, but then we decided to introduce nematodes into the soil to control the cutworms that were eating our heirloom tomato plants. Turns out, heirloom tomato plants don’t like nematodes, not at all. Then the pressure-treated boards rotted away, leaving us with raised mounds of dirt instead of raised beds. Plus, it was really hard to keep the grass and weeds under control in that tight space between the fencing and the beds.

So this year I moved the garden to a new spot, and we invested in some ready-made cedar raised bed kits. I had a few hours to spare between semesters, so I spent an afternoon putting the whole thing in place. I reused the irrigation system we bought from Lee Valley a few years back (good company, btw).

So we’ve got four heirloom tomato plants in the near field, and three hybrids plus a basil plant in the far field. I’ll be adding another square bed onto the side in a few days; we’ll plant some wildflowers and herbs in there. It’s not as big a garden as I’d like, but it’s a start. As any gardener knows, establishing a new garden is expensive, so that’s reason enough to wait till next year to expand it. Plus I’ve got two challenging classes this summer semester, and we’re a family perpetually out of time & energy these days, so I didn’t want to overwhelm us.

But it comes down to this: I want my son to grow up with a well-tended garden in his back yard. Eating fresh vegetables straight from the garden was one of the most mind-blowing things I ever did as a child, and I want Jonah to know that feeling, too. Dear old Papa Johnson would approve.